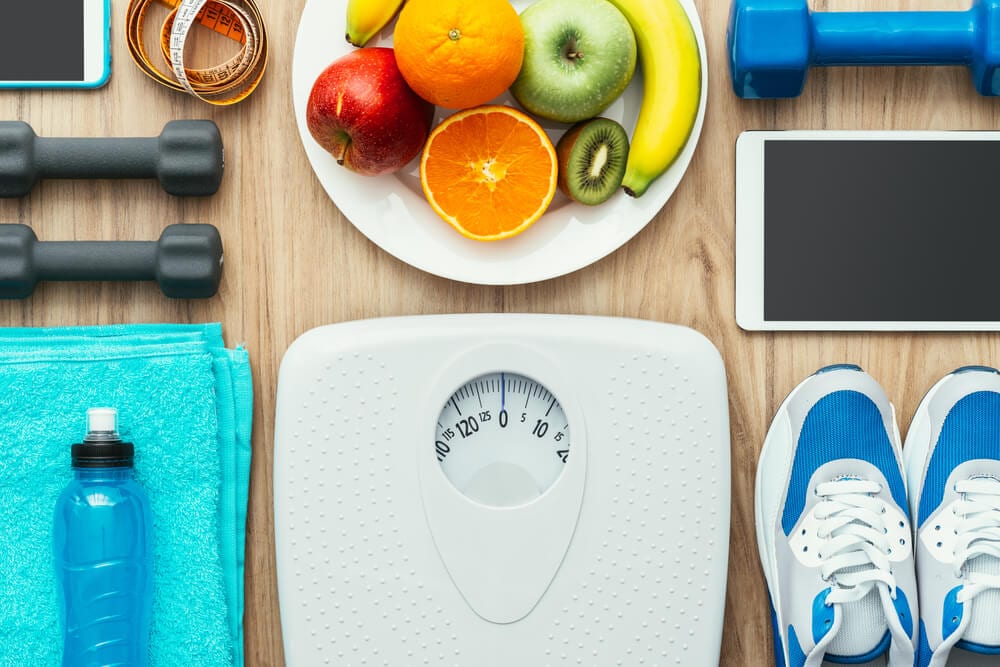 From Richard Simmons in the 70's to every nutritionist and exercise expert since, they all agree with the following: all the fruits and vegetables you can eat, nutrient dense foods when hungry which simply means foods that are grown on a farm, from a tree, a bush or from the ground, grains for fiber, dairy foods, eat smaller portions and get plenty of exercise.

If you have a beer belly, if you have a spare tire, if you are fat, obese or morbidly obese, then your body does not process sugar, animal fat, salt or beer, it stores them as fat, so you need to stop ingesting them.

EVERYTHING at the store that says fat-free and low-fat is replaced with sugar. Sugar is in everything that is produced in a factory and they can label it under dozens of different names that will confuse you.

If you're fed up from gaining weight by eating sugary food then here is a video that I highly recommend you watch, 1 1/2 hours long on YouTube: CLICK HERE.

Everything you're about to read on this page is a 100% accumulation of the most popular weight management companies such as Weight Watchers, Nutrisystem, Jenny Craig, Noom and Golo. You can click on each name and the link will take you to WebMD's reviews, and a review on Golo from Forbes Magazine.

There are only two types of food. The first is nutrient dense foods which are foods that have not been processed by machines, which means everything that is grown on a farm. Just think of this, farm grown foods are the ONLY foods that are loaded with nutrients, and most importantly, break down very slowly in your body thereby giving you strength and energy throughout the day.

The second type is machine processed food which means everything produced in a factory, meaning everything in the frozen food aisle, everything packed in cans and all whole meats that have been processed into lunch meats, including cereal, candy bars, protein bars and those tiny bottles of energy drinks. Machine processed foods have no nutritional value, break down very quickly causing you to get hungry more often and are high in sugar, high fructose corn syrup, which is why you get "sugar highs" followed by energy draining "sugar crashing" lows.

There is NO scientific proof that supplements these companies provide help with insulin resistance, or lowering your blood sugar levels, regardless of what their commercials claim. These companies have their own bias labs and so-called researchers. There is no independent outside scientific lab that agrees with their claims. If you listen to their commercials closely, you will hear them say the words "along with diet and exercise." Every independent lab will tell you that diet and exercise is all you need and that there is no guarantee that any vitamin, mineral or herbal supplement can help.

Once again, if it grows on a farm then it's good for you and if it's created in a factory then it's bad for you. It's better to eat an apple and a banana than to have a machine produced protein bar or tiny energy drink.

The following is a list of nutrient dense foods, but when in doubt, just remember they are everything that is grown on a farm:

Did you know that cereal and soda are the two main reasons why parents think their children have ADHD? So then, what can get rid of ADHD in children? Medications? NO! The solution is to avoid machine processed foods that contain sugar, like high fructose corn syrup, because they give ADHD highs and depressive crashing lows which is no wonder why children who eats cereal for breakfast can't pay attention in school.

Before sitting your children down to bowl of sugar frosted cereal every morning, think of this instead. Eggs are king. They are the most 100% complete whole foods on the planet with all 16 essential amino acids in the right ratios that are needed for the body to stay alert, reduce stress and maintain a steady energy level throughout the day without getting cravings in between main meals.

It takes just 5 minutes to cook four eggs (32g protein) and two slices of whole grain bread with "soft" margarine for those loving children you claim you care about. Maybe even a bowl of mixed fruit on the side. They won't be hungry for hours. And don't forget water, milk and avoid 100% "sugar free" fruit juice. Just remember that even fruit juices are made in a factory, not grown on a farm, so avoid them.

When your stomach growls, it's not because you're hungry, but because your stomach is shrinking. That's a good thing because as it shrinks, so will your cravings. Remember this, milk stops the cravings. So the next time your stomach growls, drink a glass of milk and wait at least 15 minutes before you eat something. You'll either not be hungry at all or you'll eat less than you normally would have. The next paragraph explains why you should wait 15 minutes after drinking a glass of milk.

It takes 15 minutes for your brain to realize your stomach is full, so instead of shoveling food down your throat as fast as possible thereby causing you to unbutton your pants and feel exhausted, just eat slowly which helps your brain catch up to the food you're eating. Did you know that very few people chew their food completely before they swallow it? Imagine your stomach filled with huge chunks of meat and candy. No wonder people have stomach aches.

If you love french fries as much as I do, avoid buying them at a fast food restaurant because they're deep-fried, high in saturated fat, covered in salt, will raise your cholesterol, clog your arteries and perpetuates obesity. It's better to slice your potatoes at home, leaving the skin on, then drop them in boiling water for 10 minutes which will soften them up and remove the starch, then rinse thoroughly until the water runs clear, then wrap them in a towel and pat them dry, sprinkle with your choice of seasoning, then broil in the oven until crispy which should be 30 minutes, turning them over halfway through, but that's not really necessary.

There's no such thing as healthy cake and ice cream. And there's no law that says you have to eat them when you're at a birthday party. Try throwing a birthday party serving vegetarian style pizza and bowls of mixed fruit instead.

You may notice fast food commercials showing double cheeseburgers with onion rings or french fries and bacon shoved into them. It's a heart attack waiting to happen and the food obese people love most. Cheeseburgers and french fries are addicting and a single patty cheeseburger and small order of fries is okay in moderation. But can you think of a healthier alternative from the list of farm grown foods listed above?

People who smoke cigarettes or vape believe in the lie that if they quit smoking they will gain weight. This is absolutely not true. It's your intake of sugar and animal fat that causes you to gain weight, not quitting smoking. The fat in animal meat makes you gain weight as well as raise your blood pressure to dangerous levels, clog your arteries, cause a stroke and can give you a heart attack. But it's mostly your sugar intake that makes you gain weight.

All diets work. They all work because every single one of them stresses to only eat nutrient dense foods, meaning foods that are grown on a farm, cut out all animal fats, salts and sugars, meaning everything created by a machine, and especially to eat smaller portions of the nutrient dense foods than you normally would, thereby lessening your caloric intake. The reason they didn't work for you is because you cheated. You consumed machine processed foods, especially sugary foods and sodas. So let's put the blame where the blame belongs.

There's no such thing as losing weight without exercise, regardless of what those "take a pill overnight and lose weight while you sleep without changing the foods you eat" manufacturers claim. If you're finally serious about losing weight then you need to exercise. Check out this great video from VDS Gym: CLICK HERE.

In the early 70s only 14% of Americans were obese with a very small portion being morbidly obese. By the year 2020, over 60% of Americans were obese with the majority of them being morbidly obese. The number one reason for this is because they have created an "I don't care" attitude. Listen carefully, because every fat person will either say "I don't care, I'm married" or "I don't care, if they don't like the way I look, screw them." I even heard a thin woman say "I can't wait till I get married so that I can stop exercising."

And the epidemic is not just in the United States but in most major developed countries as well. This is where you should take note that in small mountain villages where the people live on homegrown fruits, vegetables, grains, dairy and moderate amounts of seafood, there is little to no obesity at all and their life spans are much longer than the rest of us as well.

Whether it's mental illness or a lack of willpower, obesity is an epidemic and a health industry hazard. Television programs and commercials are capitalizing on this epidemic by attempting to convince Americans that obesity is the new norm, using words like plus size and big is beautiful, thus minimizing the most important issue, that obesity and morbid obesity is self-destructive and one of the main reasons why insurance premiums for every single American is so high across the board.

In the United States alone, more than 330,000 people die every year from obesity related illnesses. That's 913 die every day. There's no such thing as a healthy obese person.

Are you familiar with the Atkins commercial with actor Rob Lowe? In the commercial he states that you can access very healthy Atkins recipes for free on their website and you can get there by clicking HERE.

Or you may be leaning toward the Weight Watchers system recipes which you can find by clicking HERE.

Hypnosis is not the answer. Hypnosis cannot twist your arm and force you to throw out all the bad foods in your house and to buy and eat only the healthy ones. Psychological therapy is the answer, of which I can help you with. Talk therapy can help you write down the farm raised foods you enjoy most and help you plan four course meals that are more enjoyable than the crap you currently eat. Only then hypnosis can be used to help you maintain what you are already doing by giving you words of encouragement and the motivation to continue.